As it’s the season to apply to table at some great events so I thought it’d make sense to consolidate my comics stuff in one handy post, that's a little longer than usual.

I’ve accumulated some comics and zines that nicely pad out a half table and have exhibited at Comic and Zine events over the past 6 years, including Thought Bubble, and Dundee Zine fest. 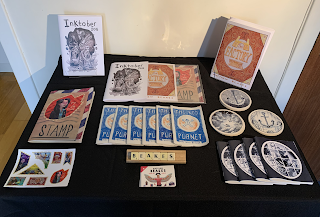 Working independently I create small runs of personal comics and zines - and each project tends to be its own separate setting and story that tries to experiment a little with small press and zine style comics. These include The Factory (2019), Coaster (2018), Red Planet (2018), Inktober 2015, and Stamp (2014)

The Factory is a 40 page no-text picture book style comic telling the life story of an embittered and unlikely industrialist. Rendered in sepia style inks. 2019

The Red Planet is a handmade riso printed mini-zine experiment about a spaceman stranded on Mars, designed to be viewed with the aid of a specially altered pair of 3D glasses, the comic plays with changing perceptions to tell a story. 2018


Coaster is a small format comic, exploring a surreal sequence, each page displaying a marker and ink drawing rendered on a cardboard drinks coasters. 2018

Inktober 2015 is a 60 page comic that explores the relationship between digital and physical, ‘analogue’ art practices, and the impact of setting ourselves daily artistic challenges. Probably the densest if not meta comic of mine, the project that both documents the inking and explores a month of creating the images, alongside actual diary reportage of the month. Tweets are rendered out entirely ink, as was the comics specially created font. Features a talking giraffe, Peter Beardsley, Phil 'the Power' Taylor and me. 2017


Stamp is a small playful comic about longing and day-dreaming, it employs a picture book approach (and it’s own set of stickers) to telling a surreal story of a woman who wished she were a postage stamp. (Originally created and debuted at Thought Bubble 2014.) 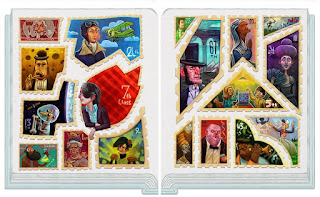 I tend to prioritise the sequential story comics that I create when at events but also have some smaller runs of prints and postcards produced from smaller projects;


I work full time as visual artist in video games, while there's cross over - creating comics is a personal passion of mine, so i'm fascinated by little ways of making things, and maintaining creative momentum around other commitments I'll be getting involved with inktober again in this year to produce something new in 2020.

Perhaps on reflection, my work sits somewhere in the space between comics and zines, by being neither true to some of the more traditional comic formats, or being entirely in the cast of the 'lo-fi' handmade editorial of zines.

I suppose put a touch more simply, (and perhaps more honestly)  I'm making comics simply to figure out what they are.