Well another year, another Inktober, similar to last time I eschewed the prompts wanting to follow more of a narrative sequence instead. It's good to be able to share more work more frequently, and I enjoy getting immersed in something. I'd picked up some neat inks and felt it gave things a good sepia feel so decided to do a sort of unspecified period drama.


As an exercise I love Inktober, (and have explored it quite a lot through comics before) mainly it's a case of how the regular creation of drawings yields surprising result that lead you to new places. Technically my inking has probably has improved some, but it has increasingly become less about that for me. This year the key thing was story telling, so it was a case of writing/planning something then  kinda pulling a picture book/ story board hat on (although the scenes are all portrait A4)

The story revolves around a family business, and is a fairly tongue in cheek period drama (with murder, dubious parenting, and villainous cads) roughly in set a world (not necessarily this one) around a 1900s setting. While it's always interesting to see how one can technically and creatively respond to a daily prompt, I really got into exploring the same spaces and characters within a world.

The time constraints of producing the artwork (the end project was roughly 48 over the month) were a pretty double edged sword in the respect that it was immensely encouraging and positive to fire out sequential artwork so quickly to form a rough draft, but obviously there were certain pacing issues and design elements that couldn't really be as considered as they might have been to keep on schedule. Thar being said, i'd say the net effect was still a positive one, as getting out a first draft seems by far to yield the most benefit - as ever 'finished not perfect' remains my mantra. 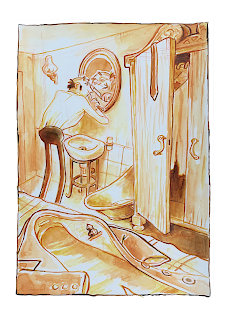 Like last year I was able to combine into a rough comic, which is an obvious plus in rushing through things  and always super satisfying for a month long project. (It was a pretty last minute thing to get it all printed and ready for Dundee Zine Fest...) 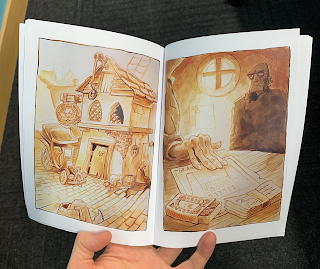 Hopefully be getting these along with some other comic projects up on some online stores soon; but since it's all on twitter anyhow so i'll end on a quick run through: