Nothing to see here...No wait!

Ok, so it's been a while since I've posted, so one might assume that nothing much has been going, however there's just been so much going on that it has displaced all other activities, and BIG NEWS, after 3 months self employment (and my mother's concerned phone calls) I have found full time employment with PopCap International, over in sunny Dublin! 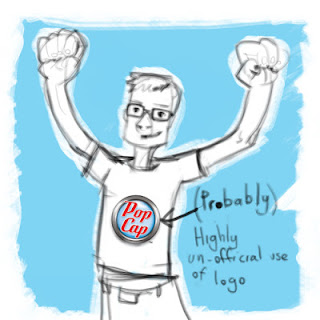 Should be a pretty exciting change for me, I've loved my time working as part of an Indie studio, and while I wouldn't wish to embark on a 1000 word essay on what makes indie indie, it's fair to say PopCap just ain't it, so it's going to be interesting to see how it compares. Seeing how the other half live aside, I'll be looking forward to developing my skills and experience as a 2D artist, so should be a great environment to learn a few new tricks. This is probably going to be my only PopCap related post, as I reserve this space for my general arty endeavours, and gubbins.

It's been emotional Newcastle, bring it on Dublin. I'm assuming that being an English guy brought over to Ireland's abundant job market, is going to be a real source of endearment across the Irish sea, but I've negotiated Byker Metro station at 10pm on a Thursday so I think I can deal with it.
More seriously though, I'm very much looking forward to discovering another country, should be an enriching experience!

Oh yes and one more thing;  'all views depicted on here are entirely my own', (as if anyone else would lay claim to them... )
Posted by Matthew Beakes at 04:38